This time, our COLUMBUS deck oven was delivered by "airmail".

In the tranquil Bad Langensalza in Thuringia our customer, the  Schmidt Bakery,  received a new COLUMBUS multi-deck oven . The delivery, however, was unusually spectacular.

The  Schmidt Bakery is located in the historic center of the small spa town with 18,000 inhabitants. The oven could only be delivered through a backyard access, which turned out to be too small for the oven measuring almost 3 x 2 meters. Hence we had to resort to unusual means: A crane should carry the oven through the air over the 12-meter-high row of houses - sort of an  "air mail" delivery.

This appeared easier said than done because our COLUMBUS brings a proud weight of 6.6 tons on the scales. For transport by crane, however, the baking stones were taken out, reducing the weight to 4.2 tons. The crane had to extend its boom nearly 40 meters high and 11 meters wide. It took a hefty 45.5 tons counterweight to hold the heavy oven. The tension was tangible as the COLUMBUS left the safe ground and slowly floated  to heaven, changed direction and was gently lowered on the other side of the wall. The spectacle attracted many onlookers who are not used to such events in the village. Even for the crane driver, this was not a routine operation: "Lifting an oven 40 meters high is completely new to us."

Thomas Schmidt, master baker and owner of the bakery, praised the quality of the WACHTEL ovens. His previous one, after all,  baked for 20 years at  least in his bakery. Nevertheless, it was time for a new generation of ovens: "The reason for the new acquisition is that this oven bakes more modern and much more efficient. The baking results are more even and I can now bake different baking goods at the same time, thanks to the option  to heat the baking chambers separately. In addition, I now save electricity, since the modern oven generation of WACHTEL bring along different energy saving features. " 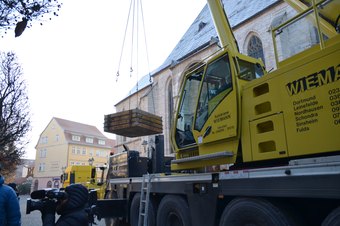 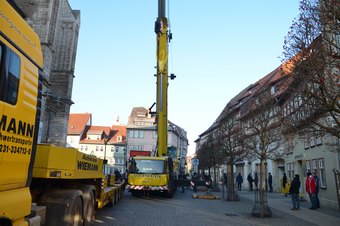 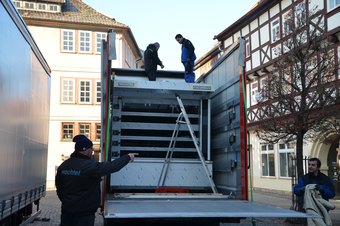 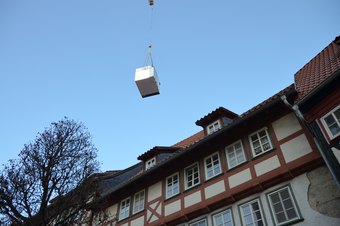 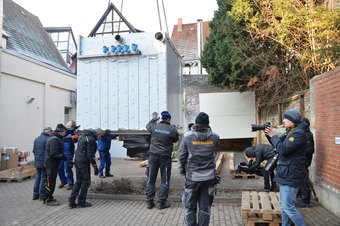 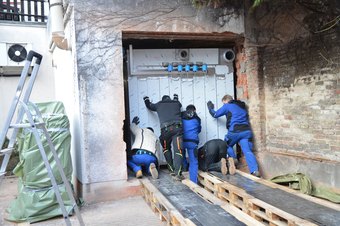